Coupling Group Saving and Housing Delivery is a Strategy to Create More Commons: An Ecological Perspective.

Posted on December 16, 2011 by Marco Kusumawijaya 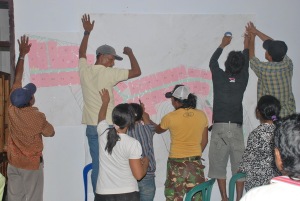 Coupling community group-saving and housing delivery in ACHR/IIED-ACCA process is a  strategic element in global transition towards sustainability, towards ecological age.

First of all it is about what that coupling means. Secondly, it is about a fundamental problem in ecology.

The coupling means formation and consolidation of finance (through saving) and space (through housing/settlement) as common resources at very real scale: community.

Being real (not imagined as in many new nation-states that emerged after World War II) means that in it there are real, direct relationships, where trust is possible and risky at the very same time, and working on a project (such as housing delivery) is a direct exercise of those relationships and trusts, testing and strengthening them, while at the same time exposing them to equally devastating risks of destroying them. But, this later end of the balance is well worth a chance because it is hardly any bit more troublesome than what the urban poor have been experiencing.

Expanding this idea of collectivity to the scale of the city (through the City Development Fund) means therefore also consolidating the city as an intermediate community, as an intermediary between the real and the abstract or even the imagined community of nation-state. However, more important than creating this intermediary function, CDF creates the possibility of making the city’s space as also a real common good.

For urban poor, the coupling of finance as a common resource with housing delivery  might be the only solution for their trouble, for having been denied access to normal resources for so long.

This denial comes from the process that have actually also denied the whole logics of the Earth, namely the logics of the common property, and presented to our contemporary world with the so called “tragedy of the commons”, where individuals compete to use as much as possible common goods (and services) provided by the Earth, and in the long run  depleting it beyond its ability to recover in time to support future (more) lives.

This tendency is not recent. It has happened in ancient episodes, as shown for example by Jarred Diamond’s book “Collapse.” But it has been intensifying in the last 250 years of industrialization, where common goods (primary resources) provided free by the Earth have been continuously capitalized as private goods, based on individuals’ ability to exploit and process them.

Now that we have data and are able to look at it in longer perspective with both distant past and future in it, we can see where it will lead us.

The most simple manifestation of the tragedy is the widening gap between increasing “ecological footprint” of human collective existence and decreasing “bio-capacity” of the single, common Earth.

The urban poor do not have comparable capacity to compete on such individualized terms.

They have tiny means. But they can consolidate their tiny bits of resources into a “meta-size” common-resource that they can use in turn, which in effect would give time to the common-resource to recover or even get bigger, to serve even bigger number of people. They have time. And this is also the logics of their common house (eco), the Earth: it needs time to recover its capacity to support (more) lives.

Therefore, the idea of the common-resource beats the capitalistic mode of resource management on two fundamental terms: time and size.  But it would be wrong to define this idea essentially in terms of size and time (which are the fundamental obsession of capitalistic development), because what makes them different is the collective spirit behind it that actually determines its sustainable formation and maintenance. It is so exactly because it aligns itself with the logics of the Big Collectve Earth.

For urban poor frugality–not just efficiency–is an inherent benefit, motivation and goal of daily life practices, because of its direct and tremendous effect on their sustenance. These practices, which are also very much in line with the eco-logics (the logics of our common house, the Earth), if developed as permanent habits, are a solution for global transition into ecological age of sustainability. Urban poor perspective offers a great opportunity of new approaches and skills in creating financial and spatial resource (housing/settlement/city…) that are sustainable and ecological, not only for them, but for all–in fact, for transforming the whole world.

Creating commons, be it financial or spatial, befits a community that is aspiring to be more intelligent and build itself a better sustainable life with finite resources in a world that should also aspire the same, and should change accordingly.  Because, creating commons requires and trains skills in organizing, articulation, negotiation, assessing own needs and ability to acquire from and to contribute to the commons. When every individual member in the saving group or community, and in the process of delivering their housing, feels free to express her/himself and to voluntarily situate her/himself within the collective whole, we can say that the collective process has been successfully emancipatory. We need to continuously focus our attention and be sensitive on this role of the community process and prevent it from being otherwise.

2 Responses to Coupling Group Saving and Housing Delivery is a Strategy to Create More Commons: An Ecological Perspective.